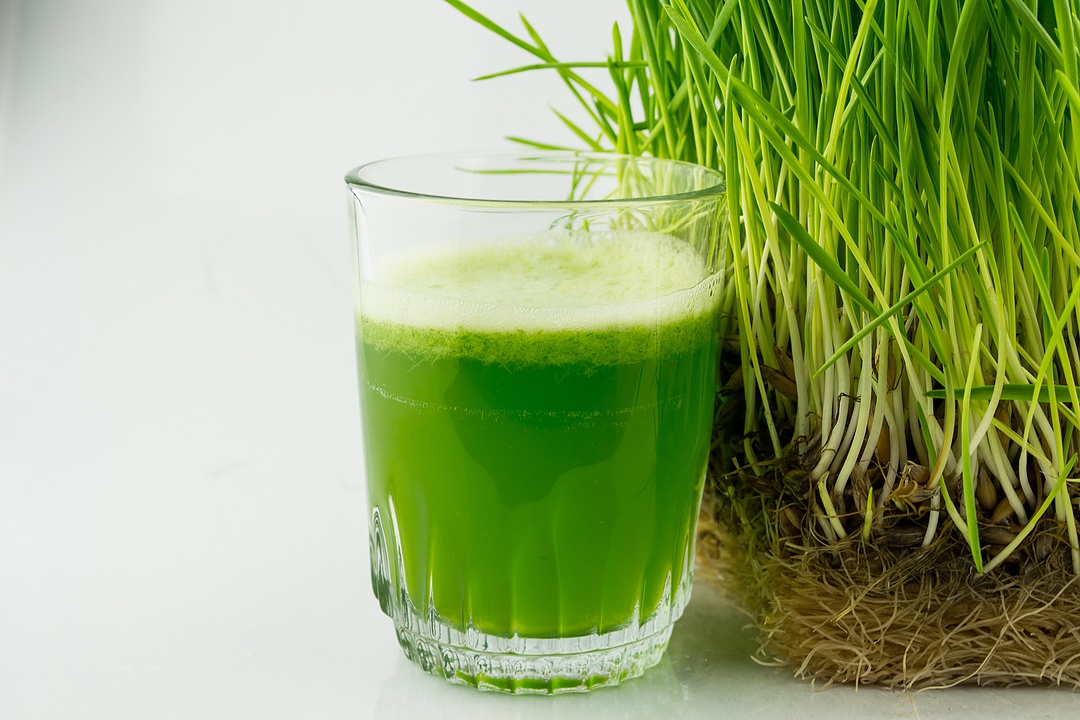 There is an incredible number of wheatgrass juicers available on Amazon and other stores today. Selecting the right juicer can be confusing. Should you choose a centrifugal juicer or masticating juicer? Manual juicer or electric wheatgrass juicer? Which juicer will extract juice from wheatgrass the best?

And, the list of questions goes on. So, here I’ve put in information that might be useful for you to choose the best cheap wheatgrass juicer.

This small wheatgrass juicer is made of stainless steel parts, which is great value for the money.

The compact size and manual operation makes it really portable. You only have to find a table top to clamp it on.

The best part of this wheatgrass machine is that it only takes one minute to wash. So for your daily wheatgrass juice, just clamp on the juicer, place a bowl under the spout, then run the wheatgrass through by cranking the lever.

Catch the pulp with your hand and run it through again for good measure! Then just undo the cap, handle and gear, and rinse them clean. How easy is that?

Check the latest price and reviews on Amazon

The Z-star manual is one of the most unique wheatgrass juice machines available in the market. It is a single augur masticating juicer, but without the motor.

This means that it will have the thoroughness of a masticating juicer but without the accompanying heat that characterizes electric wheatgrass juicers. Without the heat, the enzymes and other nutrients in your wheatgrass are better preserved.

I find The Z-star manual juicer easier to use than most other manual wheatgrass juicers. This is because its hopper (the opening that receives the hopped product) is bigger. But that’s as far as the advantage goes. The cranking is about the same with that of other masticating juicers.

With this juicer, you can juice a variety of other producing including tomatoes, vegetables and other harder produce such as apples, carrots, and ginger.

Check for the latest price and customer reviews on Amazon 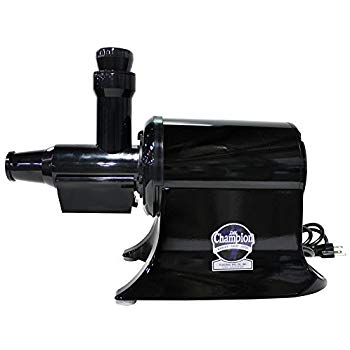 When I first got hold of this juicer, I was practically stunned for a moment or two; flabbergasted by the unique design and appearance of this very product.

Initially, I was rather reluctant to purchase it because of how it looks and the enormous size would most probably occupy half of my kitchen top space. Yet somehow I ended up getting it from the display shelf unit as the lady there recommended me this for heavy duty usage purpose.

After a considerable duration of using the juicer at home, to my amazement, I find it to be one of the best juicers that I have ever stumbled upon.

The heavy-duty motor of 1/3 horsepower operates continuously with the help of the floating cutter is an added advantage. This is because no intermittent cleaning is required as the juice is directly separated from the pulp when the juicing takes place. By having this feature, I could practically save up almost half the time on the preparation process which is the main reason why I fancy this juicer a lot!

Unlike any other wheatgrass juicers, the Champion Juicer also has a large feeding chamber which enables easy application even if the wheatgrass, fruits, and vegetables are not diced into smaller pieces. This is definitely something I look upon deeply as I am a very lazy person. By having this feature, I don’t have to waste time cutting up my fruits and vegetables into smaller portions to be put in the juicer. Basically, a whole fruit or a whole vegetable could be place into the funnel at ease!

Furthermore, to be frankly honest, after a few times of usage I find the sturdy built of this Champion juicer somewhat assuring as the strong stainless steel body seem to be able to thwart off any daily wears and tears. My parents who fell in love with frozen banana and pineapple said that the Champion Juicer is all they need to make this scrumptious and delightful concoction.

With a whopping 10 years warranty, this juicer certainly captures the heart of many users nationwide even though the price of it is a little more expensive compared to others in the market.

After trying out on the Champion G5-PG710/ G5-PG720, I would absolutely recommend it to anyone out there who plans on getting a new juicer. It produces amazing results and best of all, it is healthy and rich with nutrients.

Check its latest price and reviews on Amazon. 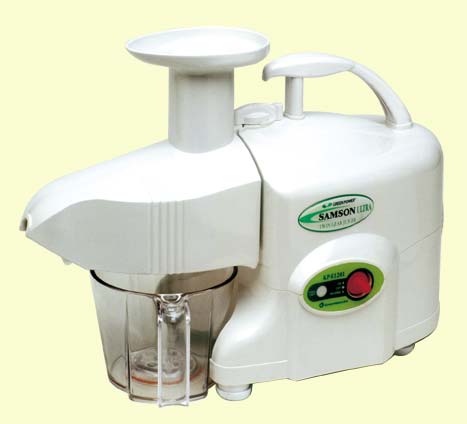 The Green Power Twin Gear Juicer KPE 1304 rocks when it comes to squeezing out fresh juice that lasts! The new bio-ceramic and magnetic technology it uses ionizes the juice as it comes out, so the juice can be kept fresh for as long as 72 hours.

Do you know what that means? No more going into all the trouble of preparing fruits and veggies for juicing when you crave that refreshing drink right now. I’ve found that preparing extra juice when I’m free is so much easier.

There are other things I like about this Green Power Twin Gear Juicer as well. Its horizontal twin gears can juice many kinds of greens, herbs, plants, veggies, and grass, besides fruits of course.

Surprisingly, they don’t clog up even when there is a lot of pulp, because this juicer totally crushes the fruits and veggies and the remains are pretty much dried up. However, one user pointed out that the juice is pulpy, which is what I like, but if you don’t, a strainer will help.

The motor is good and strong, and if anything too hard meets with the gears, it will automatically stop to protect the juicer. In any case, the Green Power Twin Gear Juicer KPE 1304 comes with 10-year warranty. Other users will tell you that the customer service is pretty good too.

One little trouble to go over the Green Power Twin Gear Juicer KPE 1304 though, is that screens have to be changed when juicing veggies after juicing fruits, or vice versa. If you juice both kinds, then washing up both screens will be required afterwards.

If you’re willing to go to that trouble in exchange for a time-saving, all-versatile juicer, the Green Power Twin Gear Juicer KPE 1304 is just great!

We also recommend this Omega J8005 Juicer due to its versatile functions and the relatively cheap price. This powerful masticating juicer ensures high yield by thoroughly chews up every bit of fiber and extract all the nutrients into juice with its 1/3 horsepower single phase induction motor.

The unit’s dual-stage juicing system ensures maximum efficiency, while keeping its low rotation speed around 80 RPMs means no foaming, no clogging, no heat build-up and no nutrient oxidized. Other than being a fruit juicer, this product can also functions as food processor, pasta extruder, homogenizer, and grinder. Yes, that means you can make your own peanut butter and apple sauce with it.

Check the latest price and reviews on Amazon

Why do you need a wheatgrass juicer?

If you are more of a vegetarian than a fruitarian, I’d strongly recommend you buy a wheatgrass juicer. Its specialized razor munches any fibre and leaves of vegetables and wheatgrass into a nutritious cup of vegetable juice.

Besides, the best wheatgrass juicers are such versatile kitchen helpers. They can be used to prepare ingredient from celery juice to herb extracts.

There are two kind of juicer that does wheatgrass juicing:

A manual Wheatgrass juicer is a hand-operated juicer that you ‘crank’ to extract juice out of wheatgrass.

One benefit of using a manual wheatgrass juicer is that the juicers are easier to clean, more cheaper than their electric counterparts, and easy to store due to their compactness.

The downside is that the variety of produce you can juice is a little narrower because most manual wheatgrass juicers specialize in wheatgrass only.

Manual wheatgrass juicers are the best choice if you are considering juicing wheatgrass only.

Most manual wheatgrass juicers specialize in wheatgrass only. So if you want to juice fruits as well, you’ll have to find a masticating juicer that does a huge variety of fruits and vegetables, such as wheatgrass, spinach, parsley, cilantro, Kale, Swiss Chard, etc.

These juicers are electric and tend to cost double what you’d spend on a great wheatgrass machine, but they are much more versatile and allow you to juice a wide variety of produce, as well as do other things like make nut butter, pasta, and even baby food.

There are two manual juicers that come highly recommended:

You can read their reviews below:

If you have more bucks to spend on a juicer – and you think you might eventually like to try juicing a wider variety of produce – we’d recommend saving up for a single gear masticating juicer which does an excellent job juicing wheatgrass as well as other produce.

You can not simply use any old juicer to try to extract juice from wheatgrass—or leafy vegetables such as kale—and expect to get good results. The best type of electric juicer for wheatgrass is a low speed, masticating style one. These juicers operate at around 80 rpm instead of over 1,000 rpm for a centrifugal type juicer that is better suited for handling fleshy fruit.

These machines operate by crushing rather than tearing apart the leaves, and this leads to the highest amount of juice extraction possible—leaving a remarkably dry pulp. The lower speed also has the benefit of preventing oxidization and helps keep greater amounts of vitamins. In addition, electric juicers can be used for a wide range of fruits and vegetables. They are also great at crushing nuts to make fresh nut butters.

The top of the line electric juicer suitable for wheatgrass is the Super Angel 5500. The best-selling and highest-rated model is the Omega J8006 Nutrition Center. For those who prefer a vertical juicer design, the highest recommended one is the Omega VRT350 Vertical Juicer.

And here is our recommendation on single gear masticating juicer for juicing wheatgrass.

Pros of a wheatgrass juicer

How to Choose the Best Wheatgrass Juicer

A wheatgrass juicer is somewhat different from the usual juicer. Most wheatgrass juicers specialize in wheat grass only. So if you want to juice fruits as well, you’ll have to find a single gear masticating juicer that does fruits, vegetables and wheatgrass.

Wheatgrass juicers can be manual or electric, but from what I’ve observed, the best juicer for wheatgrass in the market are manual ones. Not to say that the electric ones won’t work well, but they are so expensive that you might as well spend the money on a single gear masticating juicer that is versatile. The manual ones are also more portable and easy to store away due to their compactness.

You’re paying a lot for your wheatgrass machine, so you’ll want to know whether it will last. The general idea is that the more metal parts, and the less electronic parts it has, the longer it will last.

There are wheatgrass juicers that consist fully of stainless steel or cast iron parts, while some are plastic with a stainless steel auger. But I don’t advise getting a cast iron juicer because they need a lot of maintenance to keep them from rusting over time.

Read the reviews to see whether users find it easy to use. You don’t want a juicer that needs a lot of effort on your part to set it up, make it juice, and then take it all apart to clean it. Remember that the easier it is to use, the more you will use it, and that means getting your money’s worth.